Tonight at Viva after ordering some Wonton Mee take away for my roomie I took a few moments to soak in the scene before me.

It was a Sunday night, and the hawker centre was booming with people of all ages, sizes, religions and ethnicities. Noodles were cooking. Chicken was being grilled. People were bustling around bringing orders to the specific tables. 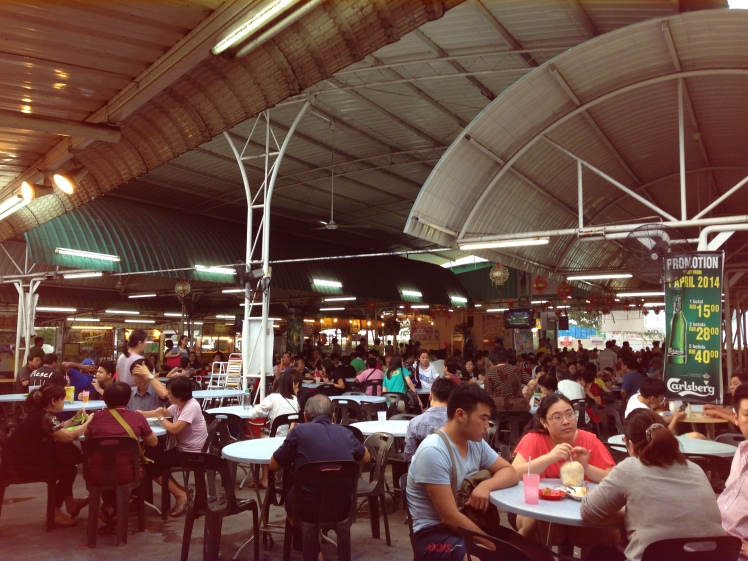 I tried my best to dodge someone smoking but couldn’t get too far away because of the crowds of people. There were a mixture of smells wafting in the air and a hum of languages that consumed the airwaves.

They have a saying here in Malaysia. They only eat one meal a day: Which roughly translated means that they basically eat all day. Food is a definitive part of the culture here; particularly in the evenings I’d say.

That was true tonight as people crowded around small tables and drank barley tea and fresh watermelon juice while waiting on their food to be brought to their tables.

I began to notice with how much precision the very small tasks were completed. For example turning the satay on the grill practically looked like an art form when the woman working did it so effortlessly and efficiently.

I’m just amazed at the skills I see in the average, every day worker at the food courts here.

They truly learn a craft. I think this is something not to be taken for granted.

There is a legitimate sense of pride (the good kind) that should take place when a job is done with excellence.   Most people can do lots of things mediocrely, but it takes hours upon hours of trial and error to carry out something with precision.

I just love to watch people that are skilled at what they do.

An expert pianist or seasoned ballerinas are practically magical to listen to and watch when they take their place. They make what’s taken them years to learn and perfect seem so natural.

For a brief time I was truly captivated by the scene around me, and I felt that the Father showed me a tiny corner of His heart and love for these “average” people.

He’s proud of them. He’s absolutely swelling with pride and love and affection for these ones. They display faithfulness and hard work. They’re not afraid to get their hands dirty and get the job done, even when most people don’t see what’s going on behind the food cart.

The scene around me wasn’t grand. It was quite normal for Penang – eating, drinking, and talking while the servers rushed around.

But as I stepped back and paused, I was taken in by my surroundings and came to appreciate a bit more of what was actually taking place, and it was beautiful to me. Master “chefs” were grilling and frying and tossing food without missing a beat. There were children chasing one another, and I even noticed one little guy walking around with no pants.

I love moments like tonight. They’re real and sweet and wonderful and make me thankful on a deeper level for people and life and God and His deep, deep love.

One thought on “Capturing the Moments”

Hello, friends. I’m Jessica. A simple lover of God and people. I pray you feel at home in this space and feel permission to process life along with me. I promise you, there is JOY in this journey. <3